Two seconds into my Skype call with Nate Adams, and he paused to stare at the rafters behind me. “Rough-hewn ceiling joints, two inches instead of one and a half, that wood color… I’d say built between 1890 and 1910.” Through pixelated video thousands of miles away, he saw my walls clearer than I did.

Nate is a building sleuth of sorts. Donning the badge of Energy Smart Home Performance, he investigates when homes have problems that their owners just can’t solve, and bust the culprits at their source: freezing temperatures, insane energy bills and seriously debilitating problems like mold infestations and indoor pollution. And he brings his trusty sidekick Foobot to every case.
“If I don’t have three of these things in a house, I’m not happy,” he said. “Because I can’t figure out what’s going on over time.” Leaving Foobot in a client’s home lets him see changes in the air in not just a single moment, but over time; how things changed from day to night, and before and after a change. And he could get all this data from the cloud without having to book a visit.
Nate told me two different stories where Foobot helped close a case—both about real people with real issues disrupting their well-being, who after a little detective work could go back to enjoying their lives.

The Case of the Mysterious Mold

Scott* is extremely sensitive to mold. His attacks would completely shut him down for days with flu-like symptoms, utterly draining him of energy and making his mind too foggy to work. It got so bad that he and his wife considered downsizing all their expenses and claiming disability so that they could live on his wife’s income alone. So they hired Nate to see what could be done. But instead of measuring the mold, he put his usual three Foobots in the house.

“If you really want to know the exact mold conditions in your house, be ready to write a check with a lot of zeros on it,” he explained. “And then you’ll only know what it was like today. Next month? Next year? Write another large check. It’s extremely difficult to know the types and quantities of mold throughout your home simultaneously, and getting a good picture takes a ton of tests. Or, we just solve the freaking problem, which is almost always stopping moisture problems.”

Mold can’t grow without moisture, and the “danger zone” where mold thrives is over 60% relative humidity. Getting the humidity below that point would be the first target.

The first clue to the problem came when they used a blower door – a large fan that pulls lots of air out of a house to measure how well the home was sealed. Within minutes of turning it on, both Nate and Scott’s wife got searing headaches. Air coming in through the home’s natural leaks was pushing mold in the walls inside the house.

His plan would work like the defroster in a car: they installed an air intake in the basement and run it through a dehumidifier. This did two things: it brought new air below the danger zone, and raised the air pressure just enough to push the mold spores outside, rather than letting them flow inside.

Scott, an aspiring gumshoe himself, scoped out the inside of the return ducts and found them to be filthy, even after a duct cleaning. He also noted mold in the outside wall cavities that were being used to return air to the furnace. It confirmed his hunch that those ducts should be abandoned and new ones built inside the house. 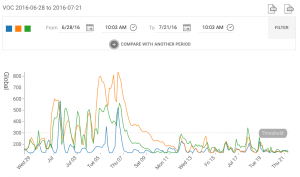 A chart from the Foobot professional dashboard showed a huge drop in pollutants in all three rooms that Foobot monitored.

After these changes, Foobot announced that they nailed it. Foobot’s dashboard showed a sudden and enormous drop in Volatile Organic Compounds (VOCs) which were spread throughout the home in a similar fashion as the mold. In his charts, Nate labeled this reading with two big words: “Holy Cow!”
Knowing they hit the target meant Nate and Scott’s family had only a few problems remaining that were previously undetectable, and the biggest problems were gone. Foobot’s readings have since held steady, and they’re waiting to see if Scott’s condition has permanently improved.

So far, it has. Scott says he’s been sleeping better and his symptoms have nearly vanished. He’s been waking up rested and with clear sinuses. Quitting his job and getting disability is no longer in the picture. That, and they found that the air is generally fresher: his son, a competitive Rubik’s cube champion, can solve his puzzle faster now that the CO2 levels are down. Their home is a happier place.

The Case of the Leaky Lair

We all know that hot air rises. That’s why the second floor in a healthy house is usually two or three degrees warmer than the first in summer. In Carl’s house, it was eight degrees warmer. His bedroom was too hot for sleep, while the first floor was so drafty in winter that Carl and his wife wore blankets like a second skin. That and the temperature wouldn’t shift wildly with each season.
From the start, Nate knew the house must have some leaks. But when he ran the blower door test, the reading was so bad that he didn’t even believe it. 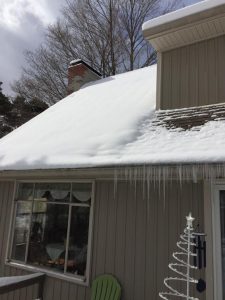 “I thought someone forgot to close a window,” Nate said. “My blower door said the house was leaking more than twice the air it should for its age and size, which is usually a horrifically leaky home type. That’s insane.”
The first step was air sealing, so the team could take control of the air flow into and out of the house. Using thermal imaging, Nate found lots of places to seal up. Plugging these leaks made such a difference that you could see which parts of the house he patched because the icicles outside those parts were gone. Leakage was reduced by a whopping 59%!
The next step is where Foobot came in. Now that the house was under control, Nate had to tweak the vents so that in the summer, the cool air would spread around the house instead of clumping in a few places. This was a delicate process because of how complex air flow is; every tweak could change how the whole system worked. With a Foobot on each floor, Nate and Carl had instant, house-wide feedback with each damper they adjusted.
So when Carl hit the sweet spot, they knew. The lines on Foobot’s dashboard that showed the cool air on the first and second floors suddenly stuck together like breath on a foggy window. Not only were the leaks plugged, but heat was now evenly distributed across the home. 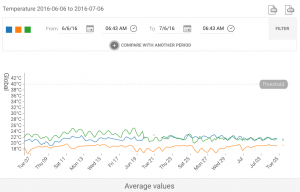 Thanks to Foobot, Nate knew exactly when his setup was perfect.

Carl is ecstatic: he’s sleeping much better, and he and his wife are comfortable most every moment they spend in their home. Once again, Nate and his Foobots made a house the comfortable, inviting place its owners deserve.

The cause of your tiredness, itchy eyes, cold feet or boiling sheets is tough to bust when it can hide in the air itself. But Foobot is no rookie to sniffing out indoor air problems. As more people welcome Foobot into their homes, as more experts like Nate use it as a professional tool, and as more features are added all the time to make it smarter and more helpful, Foobot is a force to be reckoned with in the pursuit of safe and healthy homes.
There are yet many mysteries to unravel in homes and buildings around the world. But when Detective Foobot is on the scene, the case will never go cold.

* Scott is an alias.