It’s not practical to build new sustainable homes for every household in the United States. But smart handiwork combined with technology available today can make net-zero energy houses out of the oldest, roughest houses we’ve got standing.

Picture the “house of the future:” A sustainable, zero-emissions home that keeps its family comfortable and the air clean while 100% of its power comes from the sun.

Does it have tall, spotless pillars of glass? Artsy white arcs with circular windows? Big, futuristic domes on mile-high stilts? Nope. The house of the future looks like this: 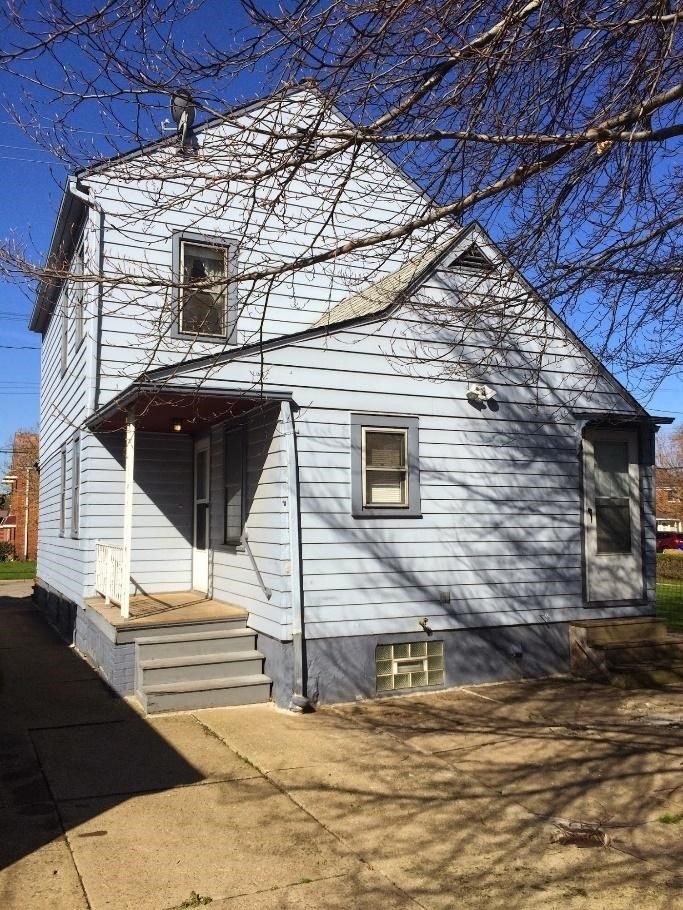 The Jetsons would be proud.

Sure, something out of a sci-fi novel might sound good on paper. But the fact is, demolishing old homes to build new, eco-friendly ones from scratch isn’t an option when there are 84 million of them already standing. The time, cost and displacement involved make it silly. And that’s to say nothing of the sheer waste of materials from bulldozing, which would defeat the whole purpose.

So we’re stuck with what we’ve got. But thanks to some new techniques and technology, even the oldest, ugliest, worn-down houses in the country can be retrofitted to be 100% powered by renewable energy.

That beauty pictured above, for example, was built in 1900 Cracked cement, peeling paint and sunken steps serve as constant proof that it came from a century long passed. But after a recent renovation, it’s heated and cooled entirely without gas, and its HVAC systems and insulation have been optimized so well that a few solar panels could easily make it a net-zero energy house, even through the harsh winters of the Midwestern state it calls home.

Nate Adams, the home performance contractor who helped make this happen, remembers first pulling into the house’s driveway. His job was to install air conditioning and to keep the energy bill down. It was a dream project: the house’s new owner, Paul, saved loads of money in mortgage and property tax by moving here, and was prepared to write a big check so Nate could “do it right.” Paul was just as thrilled; when Nate left his car and went downstairs, there was a big hole where the boiler was supposed to be. Paul was so eager for Nate to get started that he yanked it out himself. 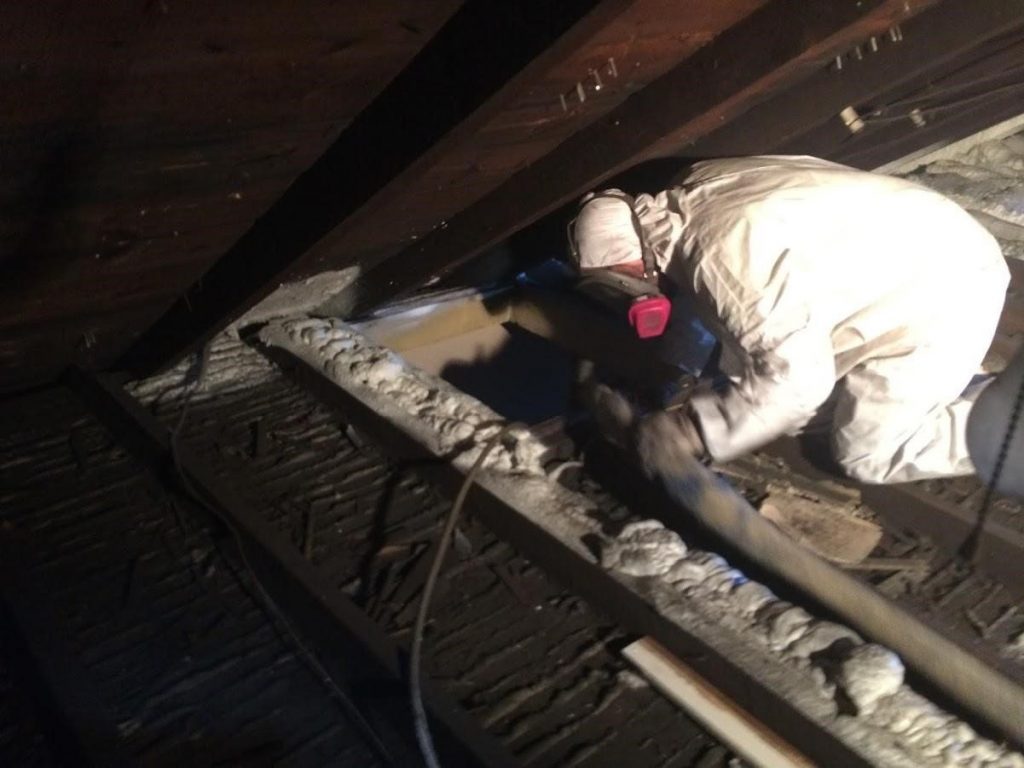 But dream project or not, it was a century-old house. Its walls and attic leaked air constantly, and endless quirks from old design and strange retrofits put limits on what they could do.

Nate had two things going for him to face these challenges. First, he’s good. He’s been in the business for nearly a decade, and his name carries weight in the home performance community.

The second thing, though, is what let Nate go beyond a job well done and turn an antique home into a house of the future, and why the same thing is possible with tens of millions of other houses: data.

Specifically, he champions continuous optimization, where one measures not once or twice, but constantly, so as to track changes over time and as soon as they happen.

To do this, he measures the temperature, humidity and pollutants of a house using Foobot smart indoor air quality monitors that he leaves on each floor. It logs all its readings over time for Nate to view on charts, giving him a glimpse of what’s going on each hour, day and week, and the interplay between each part of the house. Colored lines make it clear when there’s a problem, and when that problem goes away.

For example, he suspected that the house had a humidity problem, but it wasn’t bad enough to feel. The Foobots confirmed it, though, showing him that humidity levels would frequently pass above 60% – the “danger zone” where mold thrives. If he didn’t do something about it, Paul and his wife could get sick.

But the data also gave him the solution. It showed him that it was only on the first and second floor that got damp. The basement, on the other hand, stayed dry thanks to a new dehumidifier. So he sawed a hole in the basement’s return duct, which let dry air get sucked into the upper floors to balance things out. Immediately, the charts from the Foobot showed him that the air on all three floors was staying below 60%, one hundred percent of the time. 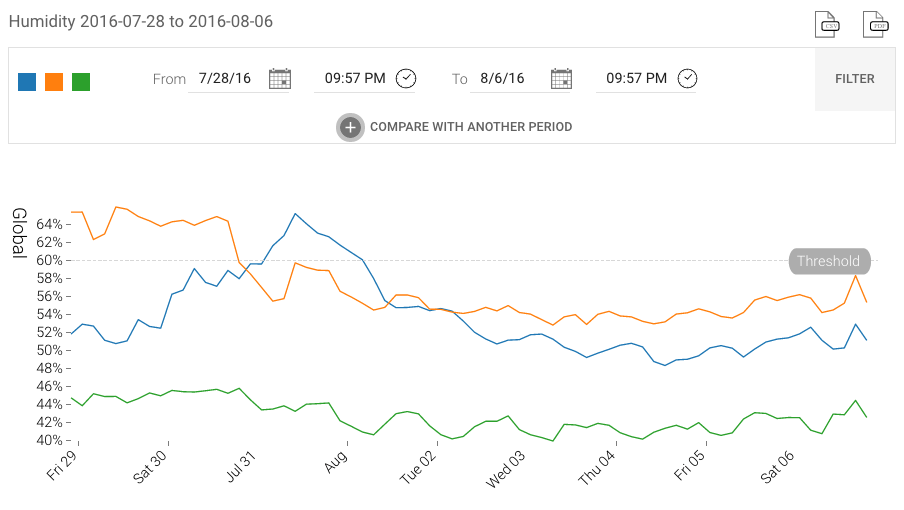 Nate cut a hole in the return duct on July 31, and the top floors (shown in blue and orange) have stayed healthy ever since.

To be clear, cutting that hole is not something an HVAC professional would do just to see what happens. But Nate’s data gave him the confidence to do it anyway. In fact, as a joke he did it while Paul was hosting a housewarming party, before Paul even knew Nate had arrived. He freaked out when he heard the sawzall ripping through metal, but laughed when he ran downstairs and saw it was just Nate doing his thing.

Aside from solving the humidity, Nate installed a modulating heat pump (which can provide both heating and cooling using little energy) a heat recovery ventilator (which lets you cycle in fresh air without losing as much heat) and an electric water heater. Then came the insulation and spray foam, which he put in leaky spots all around the building and especially on the dreaded attic duct. 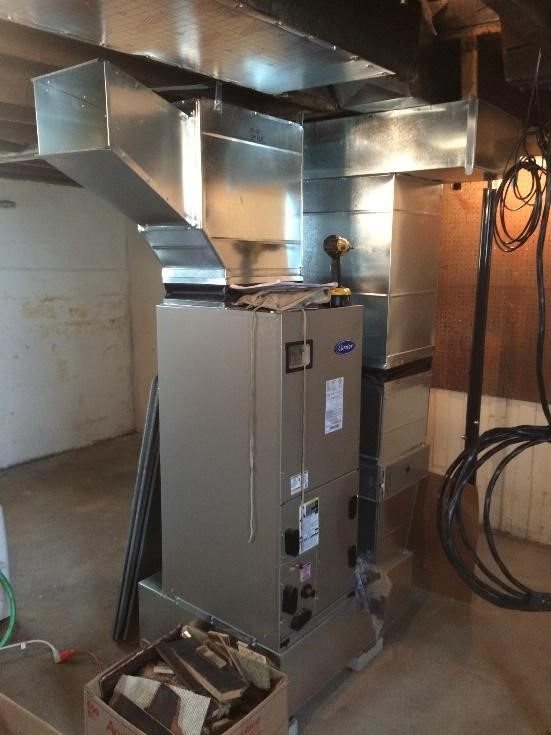 At the end of the job, his Foobot data along with traditional measurements confirmed a job well done. The house was 100% electric, and the heating and cooling worked flawlessly. The home’s blower door score, which measures leakage, went down by 55%. Not only does the home stay comfortable, but in defiance of physics, Foobot shows that the basement is the warmest level in the house thanks to the strange duct configuration.

Nate called Paul after the job to wrap things up, and see how comfortable he was with his new air conditioning. Paul, who speaks very slowly, began by saying “Tammy and I are extremely…” before pausing for what felt like forever to Nate. Finally, after scaring Nate half to death, he finished: “…satisfied.”

Not only were they comfortable, but  More important than money, though, is the fact that solar panels could easily provide this electricity on their own. That’s despite being in Ohio, which gets less sun exposure than most states. As 64.2% of the nation’s power comes from fossil fuels, this would mean keeping Paul and his wife comfortable 365 days a year without putting an ounce of carbon into the atmosphere.

And this is a 117-year-old house we’re talking about. If it’s possible for Paul, it’s possible anywhere. Which is good because the road to sustainable, healthy, comfortable housing has no room for a bulldozer. It’s about using careful measurements and clever tricks to upgrade the homes we already have. It’s about smart new technology in capable hands.

Do you feel that your old home is incompatible with comfort and good air quality? Share your reaction in the comments below.